Understanding How Drug Dependence Develops & How it Affects the Body

The cycle of drug abuse and dependence has seen a steady rise in the number of people struggling with substance abuse issues. According to the National Institute on Drug Abuse, an estimated 9.2 percent of the American population reported abusing drugs in 2012. This equals out to 23.9 million people. This number represents an increase of 8.3 percent since 2002.

Drug dependence can start as soon as the very first dose of an addictive drug. From there, drug effects gradually take over the chemical processes that regulate essential brain and body functions. Understanding how drug dependence develops can go a long way towards helping a person say “no” to drugs before it’s too late.

Drug dependence stems from any one drug’s ability to interact with the brain’s chemical system. Drugs, such as opiates and stimulants, form a type of symbiosis with the brain. Over time, the drug coaxes brain functions into relying on its effects instead of the brain’s normal regulatory control.

Once addiction sets in, the drug has all but taken over a person’s will and power of choice. This entire process starts at the point where the drug’s effects interfere with normal brain chemical functions.

The Effects of Drug Dependence on Brain Function

The effects of drug dependence start at individual cell receptor sites. These sites secrete neurotransmitter chemicals, most of which play vital roles in regulating the body’s major systems.

Ongoing drug use causes a gradual deterioration of cell structures, which makes cells less sensitive to the drug’s effects. This loss in sensitivity results in a weakened “high” effect.

At this point, someone who’s come to expect and anticipate this effect will opt to increase his or her dosage amount to compensate for the tolerance level increase that’s occurred. It’s at this point where drug dependence really takes off as larger drug amounts only cause more damage to cell structures.

In turn, with each tolerance level increase, drug users keep ingesting larger and larger drug doses. After a certain point, drug dependence sets in once brain cells can no longer secrete neurotransmitter chemicals on their own. This cycle of abuse and dependence continues for as long as a person keeps using.

Effects on the Brain’s Chemical System

Neurotransmitters act as the brain’s own chemical-based communication system. In effect, neurotransmitter chemicals transport information throughout the various regions of the brain and central nervous system.

Neurotransmitter levels most affected by drug dependence include:

Since different types of drugs target different types of cell sites, the chemical processes most affected depend on the type of drug used. Opiates target the cells that produce dopamine and GABA. Stimulants target dopamine, serotonin and norepinephrine sites. Benzodiazepines or sedatives target GABA and glutamate sites, while hallucinogens target all five neurotransmitter-producing sites.

While each drug type does interact with specific types of cells, the change in chemical production in one group of cells sets off a chain reaction throughout the brain. In effect, large amounts of one neurotransmitter chemical inevitably affect the chemical outputs of other cells.

Ultimately, these interactions work to throw the brain’s chemical equilibrium off balance, according to the University of Utah Health Sciences. The longer a person keeps abusing drugs, the greater this imbalance becomes. This process further contributes to drug dependence as the brain’s chemistry changes over time.

Effects on the Central Nervous System 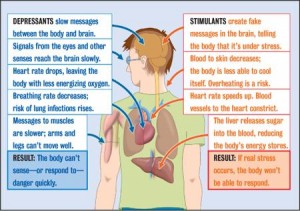 Drug dependence has a strong effect on the central nervous system.

The body’s central nervous system regulates a number of major bodily systems, some of which include:

The combined effects from brain chemical imbalances and cell deterioration greatly impair the central nervous system in terms of its ability to regulate the body’s systems. Over time, drug dependence exerts a cumulative effect, which accounts for why drug users show steady signs of decline the longer they keep using. These signs reflect the condition of the brain and body as drug dependence slowly takes over brain and body functions.

Regardless of the type of drug involved, drug dependence comes with a host of physical ailments, commonly known as withdrawal effects. Withdrawal effects develop out of the gradual deterioration of brain and central nervous system functions.

When left to its own devices, drug dependence starts to alter a person’s psychological make-up in drastic ways. Once addiction takes root, drug dependence has not only taken over the body, but the mind as well.

At this point, drug effects have altered a person’s belief systems to the point where drugs become the top priority in his or her life. The addict’s will and motivation throughout any given day center around getting and using drugs.